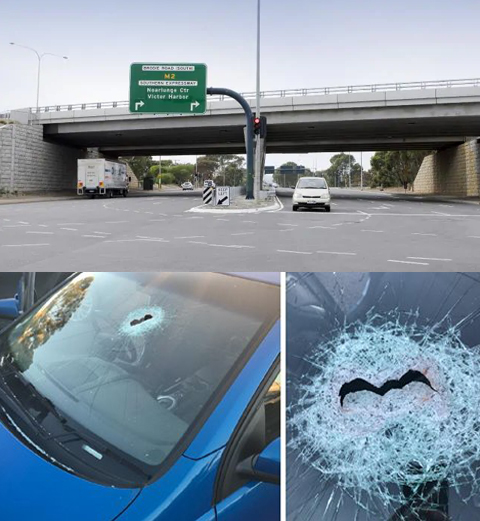 ANOTHER car has been targeted in an early-morning rock throwing attack along the Southern Expressway — as locals in Adelaide’s south band together to combat the growing “crisis”.

In less than 14 hours it attracted more than 340 members.

It comes after another attack reported on Thursday morning where a rock was thrown at a driver travelling north along the freeway — the 35th attack reported so far this year and the fourth in three days.

The rock smashed the windscreen of the car, south of the Sherriffs’ Rd intersection at Lonsdale.

On Wednesday, an object was flung on to a car travelling north along the expressway between Flaxmill Rd Bridge and Glenhelen Path, Christies Downs, about 9.30am.

About 6pm on Wednesday, a woman driving south under the Seacombe Rd Bridge heard something hit the roof of her vehicle.

On Tuesday — the same day that long-awaited Government countermeasures began to be installed — about 2.40pm a rock was thrown at a truck as it passed under the Seacombe Rd bridge at Darlington.

The drivers were not injured but the vehicles had minor damage.

Police searched the area, but did not locate any suspects. No one was seen throwing an object and no rocks or items were located on the roadway.

He hoped the power of the community would help keep people safe and prevent further attacks.

“This is getting to crisis level,” Mr Cowan said.

“This page will let (motorists know) whether there is any suspicious activity and, if people are worried about using the expressway, they can possibly jump on (to the page) and have a look to see if there has been anything reported.

“But otherwise the group would just be for communicating ideas and information … we just want people to feel safer.”

Mr Cowan said he had been invited to a “private stakeholder meeting” next week where he planned to share an idea about volunteers “manning” high-risk bridges.

“It is just an idea, but possibly between 4pm-6pm, so peak-hour traffic, if we could get a group of volunteers just to man the high-risk bridges so people feel safe, that would be something good to explore,” Mr Cowan said.

“Obviously, we don’t want a vigilante group or anything like that.”

It comes days after the State Government started installing safety measures along the Southern Expressway, which included steel mesh over loose rocks and more security cameras.

Numbered signs were also installed on bridges to make it easier to report the exact location of a rock throwing attack.

So far this year, six people, including three teenagers, have been apprehended for rock throwing incidents on the Southern Expressway.

Police increased patrols on the road this month as part of Operation Watercolour, which also focused on monitoring group of youths they believe were connected to the incidents.

Rock-throwers face charges ranging from throwing a missile to acts to endanger life, which carry prison terms of up to 18 years.

Any motorists who becomes a victim of objects being thrown at their car while driving are asked to stop their vehicle when safe and contact the Police Assistance Line immediately on 131 444.

Anyone with information about any incident of rock throwing is asked to contact Crime Stoppers on 1800 333 000.

22 June 2018 | Xenophon News | car accident, personal injury lawyer, rock throwing
FIRST CONSULTATION FREE
Discuss the merits of your legal matter and how we can assist you.