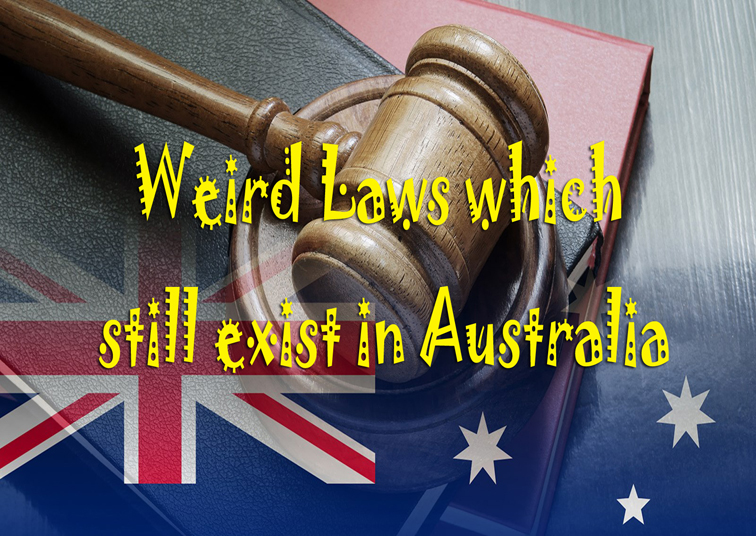 An entertaining article by Lauren McMahof of news.com.au

AUSTRALIA is home to some of the weirdest laws in the world — and some sound too bizarre to possibly be true.

A Sydney cabbie was left bemused this week after he was fined $100 for wearing brown shoes while waiting for passengers at a casino taxi rank.

NSW police admitted wearing an incorrect uniform in a taxi rank used to be an offence, but no longer — the penalty was scrapped as part of reforms in December.

But that’s not the only Australian regulation that’s had people scratching their heads.

Type “Australia’s craziest laws” into any search engine and you will unearth a huge field of news articles and websites reciting the same list of insane regulations without detail or evidence they actually exist.

So we decided to dig into some of our favourite so-called weird laws and separate fact from fiction.

And even though some appear to be more urban legend than actual legislation, it’s safe to say we are still bound by some pretty bizarre rules in this weird and wonderful nation.

HAVING MORE THAN 50KG OF SPUDS?

This is true. For now, at least.

Western Australia’s powerful spud regular, the Potato Marketing Corporation — which is the last of its kind in Australia — has the power to stop and search any vehicle suspected of carrying more than 50kg of potatoes. It’s enshrined in a law from 1946.

But good news for fans of the starchy crop: Premier Colin Barnett says he will abolish the archaic Potato Marketing Corporation if he survives the next state election next year.

It’s plausible this rule was enforced during more modest times a century ago. But today? We’re not convinced.

Of all the so-called “weird Australian laws” circulating online, this is among the top ones, so news.com.au went to Victoria’s Bayside City Council for the final word on the matter.

A spokesman for the council said Brighton Beach “does not have swimsuit requirements”, adding that a neck-to-knee bather requirement hadn’t even been recently repealed — so even if it was enforced at some stage, it was probably quashed a long, long time ago.

It’s illegal offer a reward, no questions asked, for the return of stolen property

Yep — this is actually an offence in South Australia and Tasmania.

In these jurisdictions, if a person publicly advertises a reward for the return of property that’s been stolen or lost — and the ad indicates no questions will be asked upon the return of that property — that person can be found guilty of an offence and slapped with a maximum fine of $500.

In other words, just because you’re grateful for the return of lost property doesn’t mean you have the authority to let a potential thief off the hook.

It’s a strange penalty for sure. An image of this purportedly legitimate sign from Newcastle, NSW has circulated online for years, attracting ridicule from across the globe.

But we’re calling shenanigans on this one. It doesn’t appear the so-called Newcastle Tramway Authority actually exists, except for one mention of an authority by that name that managed rolling railway stock more than 100 years ago.

A spokesman for Newcastle’s Famous Tram tours told news.com.au he also doubted it was real and the dead giveaway was the dollar sign — decimal currency wasn’t introduced to Australia until 1966 and tram services stopped operating in Newcastle in 1950.

Many people believe that unless you’re a qualified electrician, it’s illegal under Victorian law to change a light bulb in your own home — and doing so will attract a $10 fine.

Thankfully, a spokeswoman for Energy Safe Victoria has good news.

“I can confirm that it is not illegal to change a light bulb in Victoria,” she told news.com.au.

“While the Electricity Safety Act makes it illegal to do your own electrical work if you are not licensed, changing a light bulb and removing a plug from a socket were specifically exempted from this requirement under Order in Council G17.”

It’s against the law to disrupt a wedding:

It is, in South Australia. The same goes for funerals, too.

According to the Summary Offences Act 7A, any person who intentionally obstructs or disturbs a wedding ceremony or funeral — whether secular or religious — is guilty of an offence and could face a maximum penalty of a whopping $10,000 or two years’ imprisonment.

We don’t know how the “Speak now or forever hold your peace” thing stands up against this law, but there you have it.

It’s illegal to be near or inside a house frequented by thieves:

In Victoria, the Vagrancy Act 1966 indeed stipulates a person can be found guilty of an offence if they are the occupier of a house or place frequented by reputed thieves.

But that legislation was repealed in 2005.

It was replaced with consorting laws, similar to those found in other Australian states, such as the offence of habitually consorting with a person who is guilty of, or suspected of, being involved in organised crime.

In the absence of a toilet, you can lawfully urinate on the rear left tyre of your car?

The thing is, in one way or another, public urination is considered an offence everywhere in Australia and there are no exemptions for using a car tyre as a makeshift urinal.

Public urination is a straight-up offence in Queensland, South Australia and the ACT. In NSW, it’s not specifically an offence, but a person who does it will likely be charged with offensive behaviour under the Summary Offences Act and fined $500.

The same goes in Victoria and Tasmania. West Australian police recently announced they would also issue on-the-spot fines of $500 to people who publicly urinate.

Queensland’s Summary Offences Act spells it out like this: “Evidence that liquid was seen to be discharged from the vicinity of a person’s pelvic area is enough evidence that the person was urinating.”

So no, don’t urinate on your car tyre.

It’s illegal in Australia to walk on the right-hand side of the road?

Not really. It’s actually the opposite that’s closer to the truth.

According to all Australian state and territory governments — and common sense — if a pedestrian is walking on a road where there is no footpath, or no reasonable access to a footpath, they must walk on the side of the road that faces approaching traffic. On a two-way road, that would be the right side.

Aside from being plain wrong, it is absolutely an offence to interfere with a homing pigeon, according to the summary offences acts in Victoria and South Australia.

Yep — these offences have been written out specifically to protect the homing pigeon, a breed of the bird that is trained to find its way home over long distances, and is often used to send messages and for racing.

Under those acts, you cannot kill, injure, ensnare, catch or take a homing pigeon. In South Australia the maximum penalty is $250

25 August 2017 | Xenophon News | crazy laws, weird australian laws
FIRST CONSULTATION FREE
Discuss the merits of your legal matter and how we can assist you.