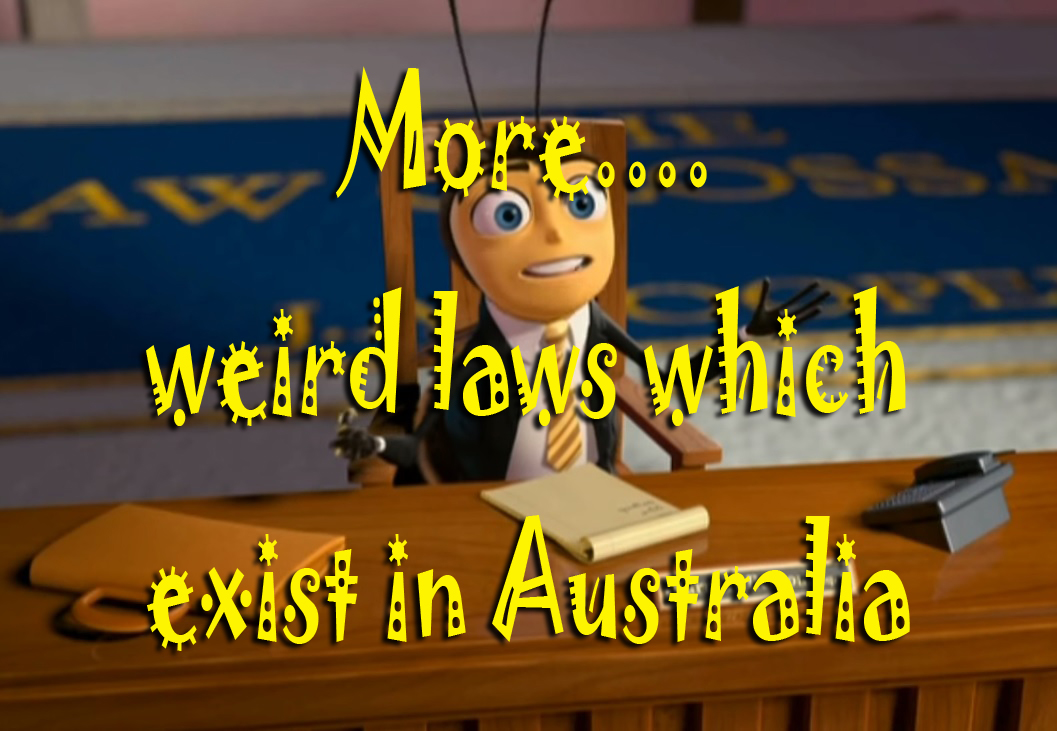 BEER CAN CRUSHING
In Western Australia it is illegal to crush beercans between your breasts in the pub!
A 31 year old barmaid who worked at the Premier Hotel in Pinjarra, south of Perth, ended up in court and was fined $1000.- for crushing beercans between her breasts!

NO BATHING
It used to be illegal to swim at Bondi Beach, Sydney during daylight hours!
At the start of the twentieth century a group of enthusiastic body surfers in Sydney managed to convince the government to overturn a law that made it illegal to bathe in the ocean during daylight as it was considered too indecent!

NO FRESHLY COOKED FOOD AT THE MARKETS
The Sunday markets in the north Queensland resort town of Port Douglas are a very popular venue, and one of the attractions was the food. Until one day the local Douglas Shire Council decided, in its infinite wisdom, to prohibit the cooking of food at the markets, and only pre-cooked food was allowed to be sold.

Now what are you more likely to get sick from, freshly cooked food or food that was cooked yesterday?

NO GANGSTERS AT HORSE RACES OR IN CASINOS
In Victoria police can issue people they suspect of having links to organized crime with an exclusion order which prohibits them from entering casinos, horse racing tracks and betting rings. Breaching of this order will cost you $2000. In NSW the penalty is a bit tougher at $5000.- or twelve months jail.

NO MATES IN CANBERRA
On 20 August 2005 it was decided by the Australian government that the security guards in Parliament House in Canberra were to be banned from addressing politicians and members of the public with the term “mate’.

This ban lasted only 24 hours, after which it was decided it was ridiculous and unworkable and the ban was lifted.

John Howard said he had no problems with use of the word mate in Parliament and Kim Beazley said he insisted on being called mate.

Not much later it was decided in the Northern Territory Parliament that politicians were not allowed to call each other ‘buggerlugs’, but the term ‘dickhead’ was still allowed.

NO MARRIAGE FOR PUBLIC SERVANTS
Up until 1966 the Commonwealth Public Service had a ban on married women. Women that performed their jobs perfectly well were forced to leave their jobs if they married!

NO MARRIAGE FOR BROTHERS AND SISTERS
Under the Federal Marriage Act 1961, it is illegal for brothers and sisters to marry but West Australian couple Kevin and Deborah Jefferies who are brother and sister by adoption, but unrelated by blood, are battling the federal law that prevents their marrying.

NO MUSICAL INSTRUMENTS ON THE BUS
In the Northern Territory the Transport Act says that it is illegal to play a musical instrument on a bus!

NO PURPLE HOUSES IN WAGGA WAGGA
In 2003 a couple in Wagga Wagga, N.S.W. decided to paint their house at 56 Best Street purple. The local council pointed out to them that it is illegal to paint your house purple in Wagga Wagga and has set aside $25000.- to take legal action through the Land and Environment Court. Does the Wagga Wagga council not know that in Normanton there is a purple pub that is one of the main tourist attractions of the town?

Luckily in 2004 the council and mayor were replaced by some new ones who so far have not dared to involve themselves in this situation. Local musos have made support songs that were played on local radio, and hundreds of people have signed petitions and letters of support so it looks like this purple house will be there for a few years to come.

NO VACUUM CLEANERS
It is against the law in the outer Melbourne suburb of Brimbank to vacuum clean your house between 10pm and 7am on weekdays and 10pm and 9am on weekends, noisy cleaners will cop a $205 on-the-spot fine, which can rise to a $1000 court fine if it is not paid, and subsequent violations attract fines of up to $2000!

NO WATER SKIING AT NIGHT
If you like nocturnal water skiing forget about a holiday to the Atherton Tablelands, (west of Cairns in north Queensland), here it is against the law to waterski during the night!

22 September 2017 | Xenophon News | Australia, extinct, FUNNY, weird, weird laws
FIRST CONSULTATION FREE
Discuss the merits of your legal matter and how we can assist you.